The nation of Erusea has launched a surprise attack on its neighbours and its sworn enemy, the Osean Federation, by employing a huge number of unmanned drones. Seizing key locations across the continent of Usea, the Eruseans plan to win the war quickly by using their superior technology. Osean forces are pushed to the fringes of the continent, but quickly mount a counter-offensive, pitting the men and women of their air force against the Erusean AI in a desperate struggle for victory. 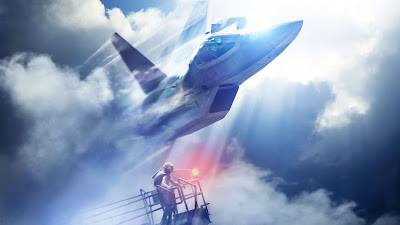 Back at the turn of the century, space combat games were all the rage. The X-wing, Freespace and Wing Commander series saw players take to the void to battle enemies in games which were perfectly-balanced mixes of arcade action, battle tactics and squadron management. This style of gameplay was extended to more realistic aerial combat as well, particularly in Crimson Skies. As the genre died on its feet, however, the Japanese company Namco took the concept further with their Ace Combat series on console.

The series hit the big time with its fourth through sixth entries and a spin-off prequel, which all took real jet aircraft and put them in the hands of fictional countries fighting one another on an alternate-reality version of Earth with completely different landmasses, in the so-called "Strangereal" universe. After the release of Ace Combat 6 in 2007, the series went in odd directions which annoyed long-term fans, with a much more arcadey experience based on Quick Time Events in Ace Combat: Assault Horizon (2011) and an online-only game in Ace Combat Infinity (2014). Clearly these didn't work out as Namco have gone back to basics with the release of Ace Combat 7. 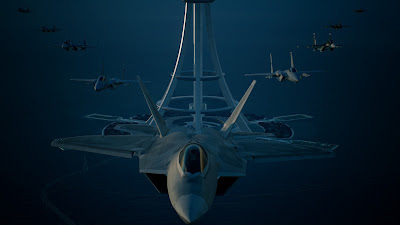 Ace Combat 7 casts the player as "Trigger," an ace pilot flying for the Osean Air Force. Early in the war Trigger is flying standard combat missions, but after a case of friendly fire he is sent to an expendable penal squadron, flying the most dangerous missions possible. After clearing his name (although the game is a bit vague on this point) he returns to front-line duty as the war enters its most intense phase. The game's story is somewhat opaque and, it has to be said, overwrought, with lengthy cut scenes featuring inscrutable characters philosophising at length. The story itself isn't particularly complex - two countries fighting, one using AI-powered drone superweapons, the other a plucky band of heroes flying against the odds - but these often non sequitur cut scenes do seem to be trying to make more of the material than there really is. Still, given the typical patriotic, militaristic gung-ho nonsense you might expect from such a game, it's refreshing to find one that instead asks more interesting questions about the morality of warfare and when it is right to fight and when not to. The game also juggles extremely detailed versions of real aircraft like the F-22, F-35, Eurofighter Typhoon and A-10 Tank Buster with advanced drones and even some hard SF ideas, like a space elevator being much of the focus for the action and the plot.

Ace Combat 7's world and story are a bit odd, but the gameplay is superb. Anyone who's even played a LucasArts or Volition space combat game, or Crimson Skies, will be pretty much at home here. After a detailed briefing, you jump in a jet fighter, customise its weapons loadout and take to the skies. As you progress through the game's generous 20-mission campaign you gain additional points which can be used to unlock better technology and weapons, including longer-range missiles, de-icing technology, lasers and whole new planes. Most missions start with you in the air and headed towards a target and they then leave it to you on how you approach the mission. 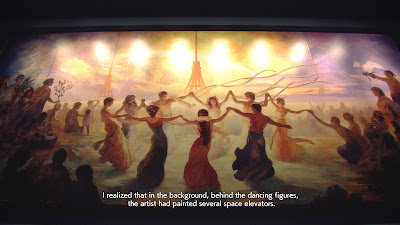 The flight model is not, in any sense of the world, realistic, but it is instinctive and fun. You can throw your fighter through loops and turns which would kill a pilot in real life, survive one or two direct hits from missiles without suffering a scratch and, in some cases, fire over 150 missiles from a single aircraft (which makes the fact that you only carry 5 flares to be all the more bizarre). You can also fly at much, much lower speeds than you could get away with without stalling in real life, allowing for greater accuracy in ground-attack missions against static targets. It's all much more Freespace 2 than F-22 Air Dominance Fighter, but given that Freespace 2 is one of the greatest games of all time, that's not exactly a problem.

You can control the game with a console joypad or mouse-and-keyboard, and the game is arcade enough for that to be viable. However, the best way to approach the game is to switch on Advanced Flight Mode (also known as "perfectly normal mode" to anyone who has ever played a flight sim before) and use a joystick-with-HOTAS setup, such as the Thrustmaster series. This gives you much finer control over speed, which is the key between the aerial dogfights being joyfully engaging and a tough, circular slog of chase-the-other-plane's-tail. In fact, using this setup may give you an unfair advantage, as many of the game's reportedly extremely tough missions become fairly straightforward. However, you can't remap controls on the joystick and some standard options (like using the hat control to look around) are missing, which is a bit odd. 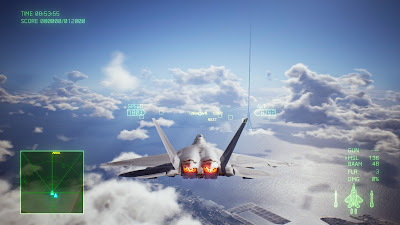 The game continues through some brutal difficulty spikes early on, although the game can be tough but usually fair: if you lose a mission, there's usually a reason for it and a way of re-attempting the attack which will bring you victory. Oddly, the worst difficulty spikes are early on, particularly around Missions 4-8. After that point the game becomes a lot easier and I sailed through most of the second half of the game without requiring a second attempt at a mission.

Progression is fairly solid and it is impossible to unlock the tech tree in a single playthrough, providing an impetus for tackling multiplayer and tackling the campaign+ mode, which also unlocks tougher difficulty levels for the more ambitious player. 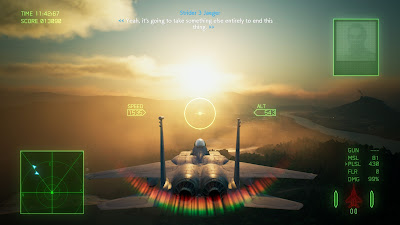 There are a few negatives to the game. There are some basic controls missing from the game, which make it tougher than it needs to be. Targeting is particularly under-developed, with the inability to target the closest enemy or target an enemy who is currently targeting you. The absence of these options - which were standard even in sims twenty years ago - makes selecting targets a bit more laborious than it needs to be, since the "select next target button" is a bit hit and miss (often ignoring targets within firing range to lock onto something on the other side of the map). Given the ludicrous number of missiles you can carry, the game is also extremely stingy on flares, which given how much time you spend jinxing away from missiles can be frustrating. The biggest problem is that your wingmen are pretty much just there for show. They rarely engage with the enemy properly and often when they do hit a target they do no damage: I've seen a single enemy fighter hit six or seven times by AI players, but it won't get shot down until I've hit it twice. The same is true of ground targets. AI players will also not get shot down by chance, only if the story requires that they die on a particular mission. There's also no option for you to bail out, which feels very odd (especially when allied players will sometimes bail out if their aircraft are too damaged).

These niggles are pretty minor, but they take the shine off Ace Combat 7 (****½) a little bit, which is disappointing as this is otherwise a supremely competent, highly enjoyable and rewarding game. More complex than its "arcade sim" moniker suggests, with an original and interesting storyline and great gameplay, I'd say this is required playing for anyone pining for the good old days of space and aerial combat games. It is available now for PC on Steam.
Posted by Adam Whitehead at 14:59