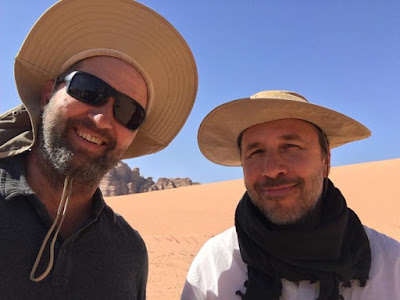 Denis Villeneuve (right) on location in Jordan during the production of Dune.

The movie was filmed on soundstages in Budapest, Hungary and on location in the Jordanian desert. Now the long process of editing and post-production begins. The new film will only adapt the first half or so of the first Dune novel, and the second part will only be greenlit if the movie is a success

Meanwhile, the unasked-for Dune TV series, The Sisterhood, has gotten a writing and showrunning team. Dana Calvo (Good Girls Revolt) and Jon Spaihts (Prometheus, allegedly a very good script before Damon Lindelof got his hands on it) will be the main showrunners and writers, with Jordan Harper (Hightown), Sarah Carbiener (You're the Worst, Rick & Morty), Erica Rosbe (Homecoming, Rick & Morty), and Minhal Baig (Hala) also working as writers. Reza Aslan, a non-fiction writer and producer on shows including The Leftovers, is also working on the project.

The Sisterhood is one of the first original shows greenlit for HBO Max, WarnerMedia's new streaming service.
Posted by Adam Whitehead at 14:00