His Dark Materials executive producer Jane Tranter has confirmed that Bad Wolf Productions are currently planning to adapt Philip Pullman's novel trilogy across three seasons. This is a change from when the series was announced in 2017, when the BBC was considering adapting the books as 40 episodes to air across five seasons. 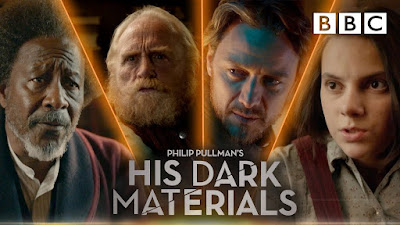 The reason for the change seems to be a simple one: the age of the young stars. Actress Dafne Keen, who is playing the protagonist Lyra (who is 11 when the events of the books begin), was 13 when they started shooting, is 14 now and will turn 15 during production of the second season (started to begin imminently). Actor Amir Wilson, who has been cast as Will for the second season, is in a similar situation. A five-season run would make both around 18-19 when the show ends, which would be difficult to make work for the story.

The move also makes it far more likely that the series will be completed. Season 1, adapting Northern Lights (known as The Golden Compass in some territories), will likely air in October or November this year. Season 2, adapting The Subtle Knife, is already greenlit and in pre-production. That makes it much more likely that the BBC and their American funding partner, HBO, will greenlight a third and final season, adapting The Amber Spyglass. The Amber Spyglass is significantly longer than the first two books, but it's also generally accepted to be the weakest of the three novels and could probably benefit from some judicious editing.

If the series is successful, it'll be interesting to see if the BBC and HBO move on to an adaptation of Philip Pullman's Book of Dust trilogy, where serves as both as a prequel and sequel series to His Dark Materials.
Posted by Adam Whitehead at 16:41