On October 14th, 2% of the world's population - 140 million people - abruptly disappear. There is no explanation, and the people left behind are shell-shocked. Some people lost friends or distant relatives, but others lost their entire families. Three years later, the town of Mapleton, New York stands as a microcosm for the world. Those who stayed behind - the "leftovers" - are trying to move on with their lives but are anchored by grief and incomprehension to their pasts. For one ideological cult, the Guilty Remnant, that isn't enough and they want people to remember more. For another, which follows an apparent prophet named Holy Wayne, they believe the Departure was the harbinger of something more to follow. 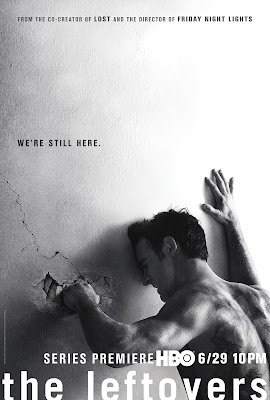 The Leftovers was a relatively low-key HBO series which aired for three seasons between 2014 and 2017. Based on Tom Perrotta's novel and produced and largely written by Damon Lindelof (Lost, Prometheus) in full-on career-resurrection mode, the series depicts an Earth-shattering, inexplicable event and then proceeds to completely ignore the event itself, instead focusing on the grief and confusion that follows, and how people cope with recovering.

It's a solid and interesting idea, as explaining the Departure seems as inherently problematic as explaining the Island on Lost. Any explanation you could come up with - SF, fantasy, religious, secular, extraterrestrial or mundane - would be ridiculous to a large number of viewers, so they simply don't go there. Some may find this frustrating, but the show is at least up-front about it by opening three full years after the event, by which point people have almost given up looking for a rational answer. That said, the fact that no-one seems concerned that it might happen again at any moment is a bit on the odd side of things.

Instead, The Leftovers is about the people left behind and the lives they are trying to salvage. The first season is a slow burn, packed with apparently unrelated and non sequitur storylines and plot points that feel scattered and disconnected, and the show can feel a little laboured until this tangled web of storylines finally straightens out and then comes together with understated elegance in the season finale. The writing and direction tends towards the weird, with occasional musical montages and surreal dream imagery being used to further the story or muse on the themes of the show. The Leftovers also operates with restraint. It never goes as full-on weird as say Twin Peaks and it withholds itself from the schmaltz that Lost could descend into at its weakest, but it toes a fine line between realism and artistic bizarreness that remains compelling.

The show is beautifully shot - as a HBO production, it looks and feels like a lot of money has been spent on it - and finely written. The cast is extraordinary in quality: Justin Theroux (Mulholland Drive), Liv Tyler (Lord of the Rings), Carrie Coon (Fargo), Scott Glenn (The Right Stuff), Amy Brenneman (NYPD Blue), Christopher Eccleston (Doctor Who), Paterson Joseph (Neverwhere) and Ann Dowd (The Handmaid's Tale), along with a host of promising newcomers. All give exceptional performances, with Tyler, Dowd and Brenneman having a lot of work to do as members of the Guilty Remnant, who refuse to communicate verbally. Visually the show is sumptuous in detail and imagery, and well-worth watching in HD (which is problematic if you're in one of those regions where the show has absurdly only been released on DVD, not Blu-Ray). Max Richter's score is phenomenal. There aren't enough superlatives for the amount of work and effort put into the show.

The show also rewards a careful thematic reading, and even rewatching Season 1 once you've seen the flashback episode (the non-ironically-named The Garveys at Their Best) that serves as its penultimate chapter, exploring the characters in the 24 hours leading up to the Departure. Working out the Guilty Remnant's goal and their ideological motivation is interesting, and seeing each episode focus on a character or group of characters and explore them in depth, often with flashbacks, is a great idea (if one Lindelof is recycling from Lost). The series also makes efforts to avoid becoming too one-note, and injects humour and humanity to lighten the gloom and the darkness that could pervade the series if left unchecked. I intercut watching the first season of The Leftovers and the second season of The Handmaid's Tale and it definitely made the latter feel very clunky and incompetent in how to balance a dark premise without descending into voyeuristic misery.

The first season of The Leftovers (****½) is a fantastically-well made and offbeat drama which explores grief, loss and faith through compelling characters, with a cast to die for. It opens a little slow and some may be less keen on the occasional cutaways to apparently unconnected story points, but by the end of the season it has done a fine job of bringing everything together and making sense, setting the scene for the radical change of location and cast in Season 2. It is available via HBO in the United States, but in the UK and other territories you're probably going to have look for an imported Blu-Ray set (the Scandinavian one is compatible with UK players) to get the show in HD.
Posted by Adam Whitehead at 13:01