Angel and his team have made a deal with the devil, joining forces with their former enemies at Wolfram & Hart following their mutual battle against the evil Jasmine. Angel believes his team can rehabilitate the law firm and turn them into a force for good, but some (including their old allies from Sunnydale) believe they will be corrupted and swallowed by the beast. The return of an old friend turned enemy turned unreliable ally causes Angel to question his place in the world...and the loss of another friend threatens to destroy the team altogether. 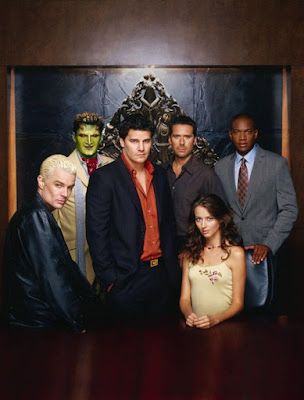 Angel's fifth and final season is an interesting one. The fourth season (and to some extent the second and third as well) had gone into an incredibly dark, intense and serialised direction which the studio had not been entirely comfortable with. For the fifth season they wanted more stand-alone episodes and a lighter tone, which the show initially struggles a little bit with. It's hard to go as dark as Angel did in Season 4 and then reel it back in.

Moving the action to Wolfram & Hart shakes things up nicely, bringing in new and former recurring characters (like Mercedes McNab's Harmony and Christian Kane's Lindsey) and setting up a new paradigm. This allows the show to switch back to a monster/case-of-the-week storyline (albeit with serialised subplots continuing between episodes, such as Fred and Wesley's growing attraction) without it feeling too contrived. The addition of Spike to the cast takes a bit more work, since his sacrifice at the end of Buffy gave the character a powerful send-off and bringing him back to chase ratings on the sister show is a bit cheesy. That said, the addition of Spike - a second vampire with a soul - helps Angel's character, by causing him to question his own place and purpose in the world. James Marsters is good as usual and the writers find things for Spike to do to develop the story and characters without him dominating the show (as arguably he did on occasion in Seasons 4-7 of Buffy).

In the second half of the season the writers seemed to realise the writing was on the wall for the show, so started layering in more serialised storytelling, setting up both an absolutely shocking, heart-wrenching plot twist that comes out of nowhere (and is beautifully sold by all the actors, particularly Alexis Denisof and a never-better Amy Acker) and a final confrontation with the forces of evil, an all-star group of villains which, it turns out, the first half of the season was cleverly setting up and foreshadowing. This gives Angel - both the show and character - its mission statement back, to present a band of people fighting the good fight against the forces of darkness, no matter the cost. If Buffy was about growing up, Angel is about working out what to do with the rest of your life and if you can find something to believe in and fight for. It's a universal theme, but one arguably rarely presented as well and without cliche as in this show.

Angel's fifth season (****½) falters slightly early on but recovers to deliver a second half which sums up the character, the show and the entire Buffyverse in tone, and gives the show and the universe one of the best, messiest and most realistic endings an SFF show has ever had. It is available now as part of the complete series boxed set (UK, USA).
Posted by Adam Whitehead at 13:31

Amy Acker was so good that it made me later quite angry that they screwed her over on Dollhouse.