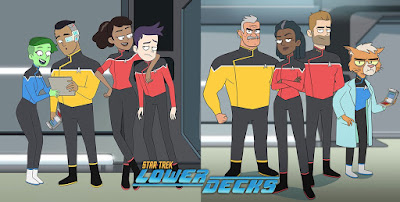 The series is set in 2380, one year after the events of Star Trek: Nemesis, on the USS Cerritos, one of the least-important ships in Starfleet. The focus is on four newly-assigned ensigns working on the ship in junior roles, with occasional appearances by the ship's command crew.

Mike McMahan (Rick & Morty) is the showrunner of the new series. It was inspired by the Star Trek: The Next Generation episode Lower Decks, which was written from the POV of several junior officers on the Enterprise-D. The series is also drawing inspiration from Star Trek: The Animated Series which was ran for two seasons in 1973-74. Most notably, Dr. T'Ana is a Caitian, the same feline species as Lt. M'Ress in the original animated series.

Star Trek: Lower Decks will debut on CBS All Access in 2020 with a ten-episode order.
Posted by Adam Whitehead at 13:30