In the beginning - well, 1993 - was The Settlers, a real-time strategy game before the genre really existed, but one that focused less on war and almost entirely on resource-gathering. Rather than amassing an army to crush your foes, you instead built up a complex economy of different resources, manufacturers and builders to enrich your faction at the expense of others. 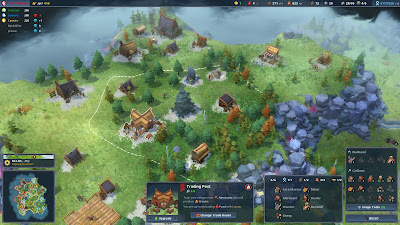 The Settlers was a great game, but also a somewhat obtuse one at times. Northgard, from Shiro Games, feels like a modern take on the same idea, but ramps down the complexity a few notches, adds a few more options for people who like smashing things with axes and also takes some inspiration from the Age of Empires and WarCraft series to make something altogether quite pleasing.

A game of Northgard starts with a town hall and a few villagers. You control and can see a single province or territory; you can't venture into the fog of war with your villagers either, as they have to be explored first. Your first order of business is therefore to build a scout camp and dispatch scouts to investigate the surrounding region. Additional provinces are exposed, but you can't build on them willy-nilly. First you have to colonise them by spending food (or, for some clans, gold). Your villagers gather food in small amounts as a default action, but you can increase your food income by building fisherman's huts, farms or hunting lodges. You can't do these at will either, but only in provinces where those resources (fish, arable land or game) are available.

As well as food, you need wood, which can be cut down from forests. As well as food and wood, you can acquire stone, iron and "lore," which can be gained by training shamans and priests, or by sending villagers to worship at shrines. Lore unlocks the tech tree, which allows you to upgrade your units or change how the map in question works.

Every game of Northgard is also a battle of time against the approaching winter. In winter food and wood production slows to a halt or, if you're not careful, can go into reverse; lose your food reserves and people start starving. It's therefore a good idea to build up food in the summer and try not to lose too much in the winter, or build so many food-generating buildings that you can stay in the positive even during the winter.

That sounds great, but there are more complications. Each province can only sustain a limited number of buildings. Build tons of food-production buildings, but then you might not have enough space to construct barracks and other military buildings. You can expand, but that means spending food on new territories, food you might want to save for the winter...and so on. Each game of Northgard is a carefully-balanced puzzle, forcing you to make tough choices on what to do next. These choices aren't helped by the varying ways to win a map: achieve fame and glory by rushing through the tech tree and sending raiders to spread your name far and wide? Or go for an economic victory? Or amass a huge army and smash your enemy to kindling? Each option has drawbacks and benefits.

The result is an engrossing strategy game that combines the economic nous of the Settlers series with the careful building up of an Age of Empires and, when the mayhem finally flies, a real-time wargame in the WarCraft mould, although the number and type of military units is somewhat restricted. Achieving a military victory is tougher than it sounds, as every soldier you send off to war is someone not available to hunt for food or chop wood against the coming winter. Losing your army in battle can be utterly catastrophic, meaning that warmongering in Northgard can be a more daunting option than in other games.

Northgard has a story-driven, single-player campaign which is good fun and introduces you to the game mechanics slowly. The characters and story are rather forgettable, but the missions are fun and the narrative drive of each mission provides a sense of purpose which is missing from the skirmish game. Once you have completed the story campaign, the skirmish mode awaits, which is the meat of the game, allowing you establish how many enemies there are and what clan you wish to control (each Viking clan has different powers, which can radically shift the early game in particular).

Negatives? Well, the game uses non-standard RTS controls which some may find irritating (alt-click to add units to a group rather than the standard shift-click, for example). The game is also on occasion rather obtuse about what is causing your production rate to drop, and sometimes information is not transmitted properly. It would also be handy if there were faster ways to locate your units: more than once I spent a good few minutes hunting down a scout who'd disappeared way off over the horizon somewhere, so he could come back to my territory to explore a shipwreck.

But these are niggles. Northgard (****½) is a cunning, rich and charming strategy game that is compelling and constantly rewarding. It is available now on Steam.
Posted by Adam Whitehead at 23:42

Not really existed? Well, maybe, but let's remember Dune 2 was in 1992, at least for Amiga. Quick google confirms that they used "real-time strategy" name.