In a move that redefines the meaning of the word "surprise," writer Robert Kirkman and artist Charlie Adlard have terminated their long-running, giga-selling Walking Dead comic with this month's issue. 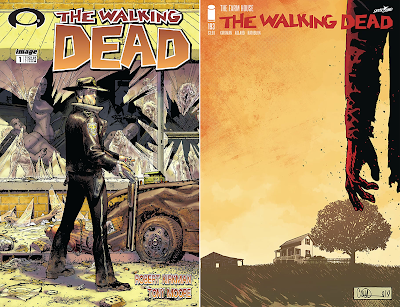 The Walking Dead began in October 2003 as the "zombie movie that never ends," with Kirkman painting a picture of a world in disarray after an unexpected zombie apocalypse. Main POV character Rick Grimes, a police officer who was shot and fell into a coma in one world and awoke in another, led readers through sixteen years and 193 issues of hell, with Rick amassing a collection of friends and allies, all trying to survive in this new world. Along the way they battled a succession of powerful villains, including the Governor, cannibals and Rick's baseball bat-wielding nemesis, Negan.

Kirkman claims that the decision to end the comic in this fashion came because he didn't want fans counting down to the end, or perhaps over-hyping it. Announcing it was the final issue just a couple of days before release had been his plan for several years.

In 2010 AMC began airing a TV series based on the comic, starring Andrew Lincoln as Rick. The show became an international phenomenon for several years, before it's star was eclipsed first by Game of Thrones and then by Stranger Things. More recent seasons of the show have had a cooler critical reception and suffered from plummeting viewing figures. The show has also deviated from Kirkman's source material, including killing off major characters who are still alive many years later in the comic timeline. However, the show remained popular enough to spawn a spin-off, Fear the Walking Dead, and a forthcoming series of TV movies. The show's tenth season will begin airing later this year.

In 2012 Telltale Games released The Walking Dead, an episodic adventure game which set new standards in writing and characterisation in video games. Several sequels followed, although these were again more coolly received after the original creative team behind the first game quit the company.