Surprising no-one, Netflix has renewed Stranger Things for a fourth season. The news hasn't been officially announced yet (that will likely come at Comic-Con this weekend), but Hollywood trade periodicals have confirmed that Netflix have booked studio space for production to begin in October. 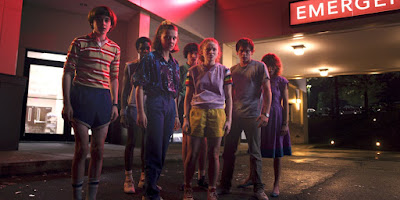 It's unknown when Stranger Things 4 would air, but the smart money is around Thanksgiving 2020. The third season is among Netflix's biggest hits to date, scoring over 40 million views during the first weekend on release (that's roughly comparable to the global viewing figures for the final season of Game of Thrones) and more since then, making a renewal a formality.

The key question is whether Stranger Things 4 will be the final season. In the past, co-creators the Duffer Brothers have seemed torn on the issue, saying they felt that four seasons was too short but five might feel too long. Given the number of other Netflix hit shows which have ended recently, I suspect Netflix will be hoping they go longer.
Posted by Adam Whitehead at 14:10