CBS All Access has released the first trailer for Star Trek: Picard, their new TV series which picks up with the adventures of the retired Admiral Picard twenty years after his previous appearance in the film Star Trek: Nemesis (2002).


The trailer explains the storyline. Picard is in retirement at his family vineyard in France (previously visited in the Star Trek: The Next Generation Season 4 episode Family) when he is visited by a young woman named Dahj (Isa Briones), who is in danger. She is attacked by unknown assailants whom she fends off. Picard requests Starfleet's aid in protecting her and ends up assembling a crew consisting of Cristobel Rios (Santiago Cabrera), Raffi Musiker (Michelle Hurd), Dr. Agnes Jurati (Alison Pill), Narek (Harry Treadway) and Elnor (Evan Evagora). 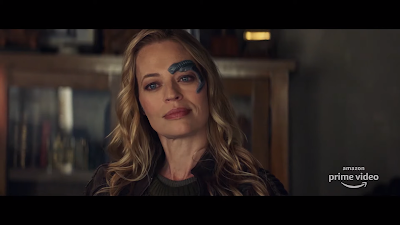 More surprising is that Picard is also joined by some familiar faces on his travels, including former Borg agents Seven of Nine (Jeri Ryan, from Star Trek: Voyager) and Hugh (Jonathan Del Arco, from three episodes of The Next Generation), and an android played by the redoubtable Brent Spiner. It appears that this android is B-4, the prototype android for Lt. Commander Data. Data's destruction in Nemesis is mentioned as another motivating factor for Picard's mission and the presumed decision to resurrect B-4 for this mission. 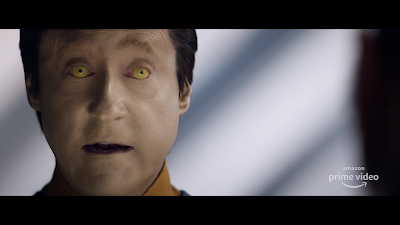 It has also been confirmed that Jonathan Frakes and Marina Sirtis will also be reprising their roles as Riker and Troi from Star Trek: The Next Generation for the series, although it is unclear how extensive their roles will be. 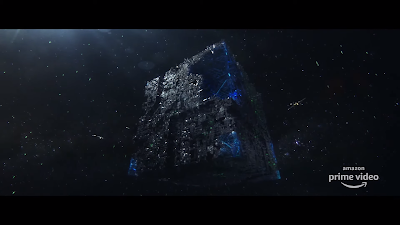 Near the end of the episode it is also confirmed who the real big bad of the series will be: the Borg! A Borg cube is shown either being constructed or rebuilt, and the Borg threat is presumably what calls Picard (who has a long-standing grudge against them), Hugh and Seven into the fight.

Star Trek: Picard will debut on CBS All Access in the United States and Amazon Prime in the rest of the world in early 2020.
Posted by Adam Whitehead at 21:06

Thanks for linking to a region-free trailer!