Cyprus Ultimate, homeworld of House Varlock, is under attack by a vast ork horde led by Warboss Gitstompa. The Blood Angels Space Marine Chapter under Gabriel Angelos responds, but to Angelos's fury he is prevented from assisting by Inquisitor Holt. It becomes clear that something greater than a mere ork raid is taking place when Eldar forces led by Gabriel's old ally/enemy Macha arrive. A powerful artefact, the Spear of Khaine, becomes the price for all three armies as an even greater threat arises. 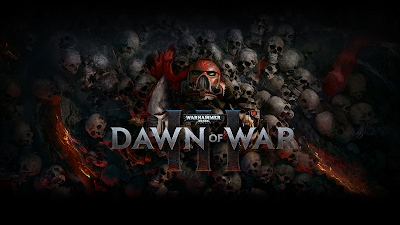 Dawn of War III is the third game in the venerable series which began way back in 2004 with Dawn of War, a real-time strategy game in the Warhammer 40,000 universe. That game was popular and certainly fun to play, but suffered with the round peg of real-time strategy being whacked into the square hole of overpowered Space Marines and Predator tanks. Although a solid game (spawning several expansions), Dawn of War didn't quite fit the Warhammer 40,000 setting.

The sequel, 2009's Dawn of War II, switched to being an action-strategy game, drawing more inspiration from the likes of Diablo than the real-time strategy genre. Instead of being able to build tons of units, you instead deployed individual heroes, each of whom was accompanied by a strong bodyguard. You then guided these hero units across the battlefield, making lots of use of specific powers with cooldowns. Despite arguably feeling more like Warhammer 40,000, at least with the high-powered units like Space Marines, the game faced a mixed reception due to the much smaller army sizes and resulting smaller battles, and the removal of base-building and defence.

Dawn of War III arrived a surprising eight years after the previous game in the series and made the cardinal mistake of trying to appease fans of both earlier games in the series, by restoring much of the base-building, defence and territory acquisition elements of the first game, but also retaining the second game's focus on hero units which require detailed micro-managing on the field of battle at the same time you're also mustering a large force of dozens of units to stomp across the map. In the immortal words of Ron Swanson, "Never half-ass two things. Whole-ass one thing." Dawn of War III suffers accordingly from its lack of focus and its attempts to please everyone.

That's not to say that fun can't be had with the game. The storyline - although tiresomely leaning on the "enemy sides who fight each other for the whole game before joining forces against a mutual threat" cliche that was dull and boring when StarCraft did it twenty-one years ago - is perfectly enjoyable and it's fun catching up with returning characters from the original game and its expansions. For the first time in a linear Dawn of War campaign, you can also play all three of the base game's playable sides, with the story rotating through the Space Marine, Ork and Eldar factions. This is at first fun, but rapidly becomes frustrating, as you spend an entire mission (which may last anything up to two hours) learning the intricacies of one faction, only having to switch to a new faction in the next mission and it may be several missions before you get back to the same side (especially given the prevalence of missions where you don't engage in standard battles, instead guiding a hero unit on a solo mission behind enemy lines). 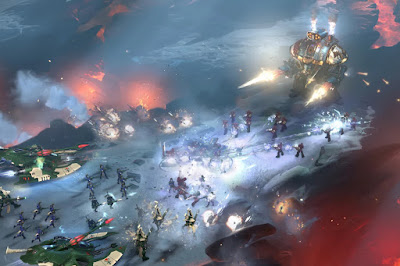 Once battle is joined, the game can become frantic, with modern graphical power making explosions, special abilities and so on quite spectacular. However, outside of the fighting the game is cumbersome. As with most of Relic's real-time strategy games going back to Dawn of War, controlling resource points on the map is key. Unlike other Relic games, these resource points are extremely rare, sometimes with only 3 or 4 on a whole map. This wouldn't be a problem if you had the ability from both the Dawn of War and Company of Heroes series to build defences around each resource point as you see fit. You can't. Instead, the resource point gets a single turret if you build a listening post on it and that's it. You can't build static defences at all, which is preposterous (the orks can build Waaagh! Towers, but only five maximum on a single map, and their guns are pretty feeble). The income from each resource point is also risible, even when you fully upgrade it. As a result, gathering resources is much slower and more precarious than in Relic's previous four real-time strategy games and seven expansions.

Worse still is the inexplicable removal of Relic's superb cover system, which allowed your unit to take cover in bomb craters or destroyed buildings, or hide behind wrecked vehicles. This is gone, replaced by carefully marked "cover shelters" which your units have to capture before being able to take cover. This is insane, makes no sense, and makes battles a frustrating start-stop affair rather than the rolling back-and-forth of previous games.

Unit costs are also far too high. More than half of the maps in the game I completed without even hitting the halfway point on the unit cap, as building a full-size army took such an ridiculous amount of time that it frequently wasn't worth even trying.

Later in the game it perks a bit more into life, by giving you much more starting resources so you can field a much better force. The last few missions also focus on the deployment of large-scale war machines on the battlefield, which are great fun (particularly House Varlock's Knight, a building-sized war mecha). The last few missions are far superior to the rest, allowing you to experience the game's full range of tactical and strategic options. But I suspect many players will have given up in frustration long before then.

Dawn of War III (**½) is not a complete disaster, and can be enjoyable in parts. But by trying to merge the MOBA-like qualities of Dawn of War II to the RTS stylings of the original, the game has ended up being a weird hybrid which doesn't achieve the strengths of either genre. Worth playing if you are a fan of the first two games, but only if you can get it cheap.
Posted by Adam Whitehead at 14:59